Why EquaReact® for Industrial Wastewater?

NETZSCH Pumps North America, LLC, experts in solutions designed specifically for difficult pumping applications, announces the new N.MacT Twin Shaft Grinder, designed to protect pumps and processes. The N.MacT is designed to fragment a variety of materials, and is ideal for wastewater treatment, biogas and biomass plants, food, animal processing, and other waste and industrial applications. Available in both channel and inline (flanged) housing construction, the N.MacT can be installed into effluent channels or upstream from a pump.

Models feature from 1 to 6 cutter cartridges per shaft. Cartridges come pre-assembled, with a worry-free pre-stacked spacers and blades and are available in different materials depending on the application. The cycloidal gearbox is maintenance-free for up to 2 years. The grinder comes standard with different cutting gear sizes for different shaft speeds, resulting in better grabbing and grinding.

Available accessories include a control panel to ensure operator and equipment safety, a cutter cartridge cleaner that keeps the area free to cut and allows fluid passage, and a transmission shaft extension that elevates the electric motor to above the fluid limit.

TIGG has been around for over 40 years so it is safe to say we are experts at what we do with Granular Activated Carbon, and we do a lot!  TIGG provides a broad range of systems, equipment, and services for the removal of trace contaminants from air and water. Whether the equipment is used for environmental remediation, municipal applications or industrial process purification, customers appreciate our expertise in designing systems that solve problems. 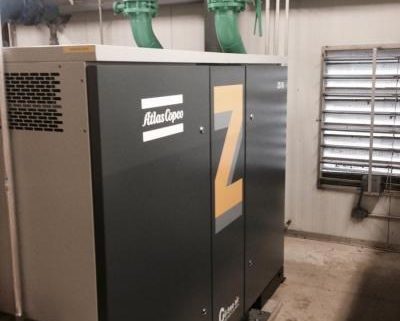 The wastewater treatment plant in the Town of Hurlock, Maryland provides service to approximately 2,100 residences. However, the majority of the water treated comes from a nearby poultry processing plant, giving the plant influent a high organic content. That is why the Town of Hurlock replaced its two million-gallon-per-day (MGD) lagoon plant with a 1.65 MGD four-stage activated sludge facility ten years ago. After construction was completed, operating costs of the new plant were significantly higher than before. This meant the town had to get creative in order to keep costs down for their ratepayers.

The activated sludge process was developed in the United Kingdom in the early 1900s and is currently utilized in medium- to large-scale wastewater treatment plants. The activated sludge process separates the flocculants (suspended solids) from the wastewater through sedimentation. Effluent enters the aeration tank or lane, and low pressure air is introduced through a grid of diffusers. Water usually passes through the process in a few hours, while the sludge retention rates vary from a few days in warmer climates, to a few weeks in colder weather.

Although similar to the activated sludge process, lagoon aeration is typically used in rural areas with small- to large-sized plants. A series of shallow earthen basins (lagoons) act as the aeration basins and holding tanks. Although lagoons are often equipped with surface aerators, there are several diffuser systems available specifically for these applications.

City of Hurlock Wastewater Plant Superintendent, Eric Barnhart, said the lagoon system was cost effective, but did not provide the desired quality of effluent they were looking for. The activated sludge treatment facility in Hurlock has won several awards. The plant was first named the Maryland Rural Water Association Wastewater Treatment Plant of the Year in 2008, before winning an award from the EPA in 2009 for operations and maintenance excellence. The problem, however, was that the new activated sludge plant used nearly 7 times as much energy as the old lagoon system (now averaging $18,000 per month in electricity).

In an effort to reduce energy consumption in 2015, the plant turned to the largest energy consumer in their plant. Blowers, for aeration and mixing, typically account for 40 to 75 percent of the total energy consumption in a wastewater treatment plant. For the Town of Hurlock, the aeration blowers accounted for $7,000 per month of their total monthly $18,000 electrical cost. When the activated sludge plant was built, positive displacement lobe blowers (PD blowers) were installed to provide air to the aeration basins. Although only ten years old, the 75 HP lobe blowers were very inefficient. To understand why, one first needs to understand more about the technology.

The lobe-style blower invented in the 1800s remains very much unchanged today. The primary advancement in lobe technology over the past 150 years has not been improved efficiency, but reduced noise. Bi-lobe blowers produce very high amplitude pulsations at a low frequency. In order to reduce the amplitude and increase the frequency of the pulsations, a third lobe was added. While this innovation decreased efficiency slightly, it reduced noise levels to below 85 dBA as mandated by OSHA. Figure 1 below shows the four stages of compression of a tri-lobe blower.

While lobe blowers are reliable and work well in many applications, their inefficiency is a big drawback. One of the reasons PD blowers are inefficient is due to rotor slip. Slip occurs when hot (compressed) air moves back to the inlet of the blower past the small gap between the rotors, and the rotor and casing. This means the hot air must be compressed again before being discharged to the system, reducing capacity and efficiency. In general, slip increases as pressure increases.

Another reason PD blowers are inefficient is due to external compression. As air passes through a PD blower, the actual compression of the air occurs at the discharge flange due to blowback of the receiver. A pressure versus volume graph (p-v diagram) of the lobe blower’s four stage compression cycle is shown below in figure 2. The laws of thermodynamics dictate that the area under the curve is proportional to the amount of power consumed. Therefore, by reducing the volume of air during the compression cycle, the area under the curve can be reduced (AKA: reduced power). This reduction is accomplished by a rotary screw blower.

In an effort to increase the efficiency of positive displacement blower technology, the rotary screw blower was introduced to the market in 2009. The rotary screw blower uses a helical screw profile, instead of lobes, to create internal compression of the inlet air. The screw rotor profile serves three purposes. First, the internal compression of air reduces energy consumption by 30 percent compared to traditional lobe blowers. Second, the helix of the rotor profile helps to reduce slip by creating a tighter gap between each of the rotors and the blower casing. Third, the helical rotor profile also eliminates the pulses caused by a lobe-style rotor. This means that screw blower noise levels are typically below 75 dBA, which is three to five times quieter than conventional tri-lobe blowers. Figure 3 illustrates the compression stages of a rotary screw blower.

After learning the advantages of screw blower technology, the Town of Hurlock elected to replace two of their 75 HP lobe blowers with 75 HP Atlas Copco ZS rotary screw blowers. Both new ZS blowers were installed before the end of 2015, and have been running ever since. “We really like our Atlas Copco blowers,” says Barnhart, “We are able to get more air out of them and use less energy than we did with our old lobe blowers.” Figure 4, below, shows the old lobe blowers installed at the plant.

Now that the new screw blowers have been in operation for a few months, the difference between the two technologies has become apparent. The lobe blowers typically operate at 28 Hz on a VFD, and draw approximately 74.3 Amps. The Atlas Copco ZS75VSD rotary screw blowers consume only 67.5 Amps when operating at the same frequency. The plant electrical cost has gone from approximately $18,000 per month to $16,800 per month, resulting in over $14,000 in energy savings each year. According to Eric Barnhart, “We are saving about 30% in energy with the new Atlas Copco blowers.”

The Town of Hurlock seems to be fully committed to sustainability. They have 5 acres of land housing 3,420 solar panels on 114 fixed-array tables. “We buy electricity from VW Energy, and it saves 10 to 12 percent on our electric bill,” says Barnhart. “After 20 years, we’ll save about $500,000 and the system will belong to us.” The wastewater treatment plant will soon switch to all LED lighting, something that has already been done at the water treatment plant and town office building. With all of these plans in place, the town wants to handle the upgrades economically, says Barnhart. “Over the next three years, we’ll phase out the other three blowers and replace them with the Atlas Copco models.”